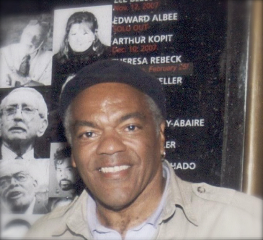 Hershell lives in the great northwest and spends his time playwriting and developing research for a study on an African American theatre aesthetic. Having worked as a college professor he holds a BA in theatre from Tufts and MFA in acting from Brandeis. He has acted professionally in television and an MGM film. In 2008, his play Billie’s Blues, Tonite at Mama’s Jam, about jazz legend Billie Holliday, was performed at the historic Cherry Lane Theatre in New York. He is currently working on a new play, called Fell the Tallest Tree about actor-activist from the 1940’s, Paul Robeson. Recently, Hershell acted in the play I Ain’t Yo’ Uncle, a student and staff production at the University of Oregon.